When Chinese agricultural experts visited Mozambique a couple of years ago, they found a lot of rich but mismanaged soil. Highly dependent on weather, the rice yield per mu was only 100-200 kilograms there without scientific planting techniques.

Now with the effort of many experienced Chinese experts and China-invested agriculture enterprises, "the rice yields in most areas of Mozambique have reached 600 kilograms per mu," said rice cultivating expert Li Ganghua, who has been to various African countries with his Chinese coworkers to teach local farmers rice planting skills. "It's common that the rice yield triples [its previous harvest]," Li told the Global Times.Li recalls the African villages he has been to, and the lively scenes of locals singing and dancing with drums at harvest time. "They are warm and passionate, and they appreciate the help that Chinese people gave them," said Li, a professor at College of Agriculture under Nanjing Agricultural University (NAU)."We are thinking about... whether we can design some [poverty reduction] methods, which have been proven effective in China, for the reference of African countries," Wu Peng, Director of the Department of African Affairs in the Chinese Ministry of Foreign Affairs, said in a speech he delivered in late October.At the eighth Forum on China-Africa Cooperation (FOCAC) in Senegal this week, China and several African countries are expected to jointly plan out cooperation for the next three years, Wu said. The poverty-reduction [experience sharing] will be a part of the discussions, he said.For decades, China, while exploring its way of rural poverty alleviation and development, has been sharing its experiences with many African countries, such as knowledge and skills in crop cultivation, irrigation, road and network construction, and the development of e-commerce.China's poverty alleviation is a great project that has attracted global attention. Now, following the project, China's new rural revitalization strategy can also provide a reference for poverty reduction to its African friends in this new era, observers told the Global Times. 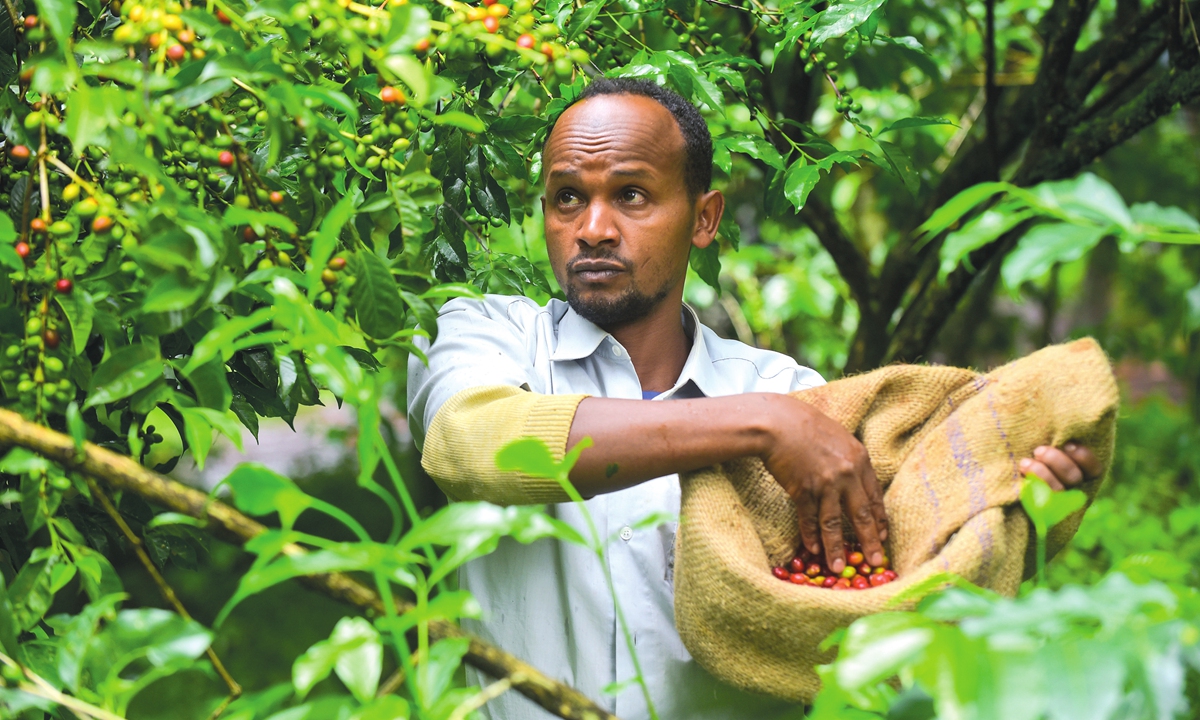 A farmer picks coffee beans at a farm in Ethiopia on September 22, 2021. China is a major importer of Ethiopian coffee. Photo: Xinhua

The rice storySharing with African countries crop cultivation techniques is one main aspect of China's efforts to help local African villages fight poverty. Many outstanding Chinese rice cultivating experts, including the team of "the Father of Hybrid Rice" Yuan Longping,  have been on the ground in Africa, teaching locals rice planting skills.Li has visited villages in African countries including Kenya, Tanzania, and Mozambique since 2006 to fully understand rice-growing practice in each respective country. He found that the natural conditions in many local areas are even better than those found in China. "Such as the natural wetland near Lake Victoria which is very suitable for growing rice," Li recalled.By contrast, the lack of water infrastructure and outmoded planting techniques by locals at that time meant swathes of rich arable land went to waste for much of the year. Having been to almost all the rice-planting areas across China, Li believed that much of the experience of Chinese rice growers could be shared with their African peers. During his visits to African villages, he suggested that people there build water conservancy and irrigation systems, like those built by Chinese villages designed to provide adequate water for the rice growth.Li himself also brought various types of rice seeds to Africa to know which one grows best there. "We introduced the seeds used in Chinese areas with the similar latitudes in Africa, which can better suit the soils there," Li told the Global Times. "In terms of latitude, Tanzania is similar to China's Guangdong, Guangxi, and Fujian provinces, and Kenya is similar to our Hainan island," he said.The university Li works at has long been cooperating with African countries in cultivating agricultural talents from Africa. Li mentioned that his student Elidio David Cambula from Mozambique, who had studied [crop] cultivating techniques at NAU, went back home after graduation, and now works as an engineer at China-invested Wanbao Agriculture Park Project in Mozambique.

African students learn how to plant fungi at the Fujian Agriculture and Forestry University on August 12, 2021. Photo: Xinhua

Started in July 2011, the Wanbao Agriculture Park Project is one of China's largest rice-growing projects in Mozambique. The project reportedly planted 2,400 hectares of rice in collaboration with 500 local households during the 2018-19 planting season, increasing the rice production from 1.5 tons per hectare to seven tons.Li cares deeply about rice cultivation in Africa although he is not there. Amid the pandemic, he keeps in touch with some African villages online. "They come and ask me for help when they encounter problems [in rice cultivation]."Poverty-reduction modelSince 2012, through projects such as sending Chinese agricultural experts to Africa, more than 50,000 Africans have been trained and 23 agricultural demonstration centers have been built, according to a white paper on China-Africa cooperation that the Chinese government released on Friday.More than 300 crop types have been cultivated on a trial basis in Africa with the help of Chinese experts, the Xinhua News Agency reported in November. Some crops, such as Juncao (fungus grass), were introduced to Africa by Chinese experts, after they had successfully been used in several of China's villages in the country's campaign to alleviate poverty. Juncao technology is a technique developed by Chinese scientists to cultivate a hybrid grass that can be used in mushroom farming as well as being an important multi-functional agricultural resource. When visiting the Gobi Desert in Northwest China's Ningxia Hui Autonomous Region, one of the areas where the Juncao technology was first applied in China, the Global Times reporter saw patches of grass breaking through the soil and grow stubbornly in barren saline-alkali land. In the breeding base, rows of green giant grass, four to five meters high, sway in the breeze, expressing the prosperity hopes of local farmers.Local officials told the Global Times that Juncao has become an important tool for local environmental improvement and poverty alleviation. Compared to the large-scale, mechanized agriculture mode in the West, the crop planting experiences and tech systems of many Chinese villages are more suitable for the small scale farms in Africa, said Chinese agricultural specialists. "From this perspective, Chinese villages can be a good model for African villages to reduce poverty through agriculture," they told the Global Times.Experts at Beijing-based China Agricultural University, for instance, have been introducing drought-resistant technologies in China's lesser-developed northwestern regions to Africa since 2012, teaching how to grow corn in countries like Tanzania. In Tanzania's Morogoro region, a village's corn yield greatly increased from 66 kilograms to nearly 200 kilograms per mu. "Now more and more people in the village have built new houses and buy bicycles, and village stores have seen a growing number of clients."Connect to the worldApart from sharing crop cultivating techniques with African villages, in recent years the world has also seen China spare no effort in helping connect people in rural Africa to the world with modern internet tech.The eFounders Fellowship Programme, a partnership between the United Nations Conference on Trade and Development (UNCTAD) and a business school backed by China's tech giant Alibaba, was launched in 2017 to mentor 1,000 e-commerce entrepreneurs from developing countries. According to statistics published on the UN website in November 2019, the business by the 122 program fellows that spread to over 17 African countries "created 3,400 direct jobs on the continent and generated $100 million in annual revenue." "And these numbers are growing," it said.Another popular China-aided project, "Wan Cun Tong," or "Access to Satellite TV for 10,000 African Villages," has successfully been carried out in 20 recipient countries in Africa as of August 2021, benefiting more than 6.5 million people in 8,612 villages, the Global Times learned from StarTimes, a Chinese television subscription service provider that was contracted to implement the project across Africa. 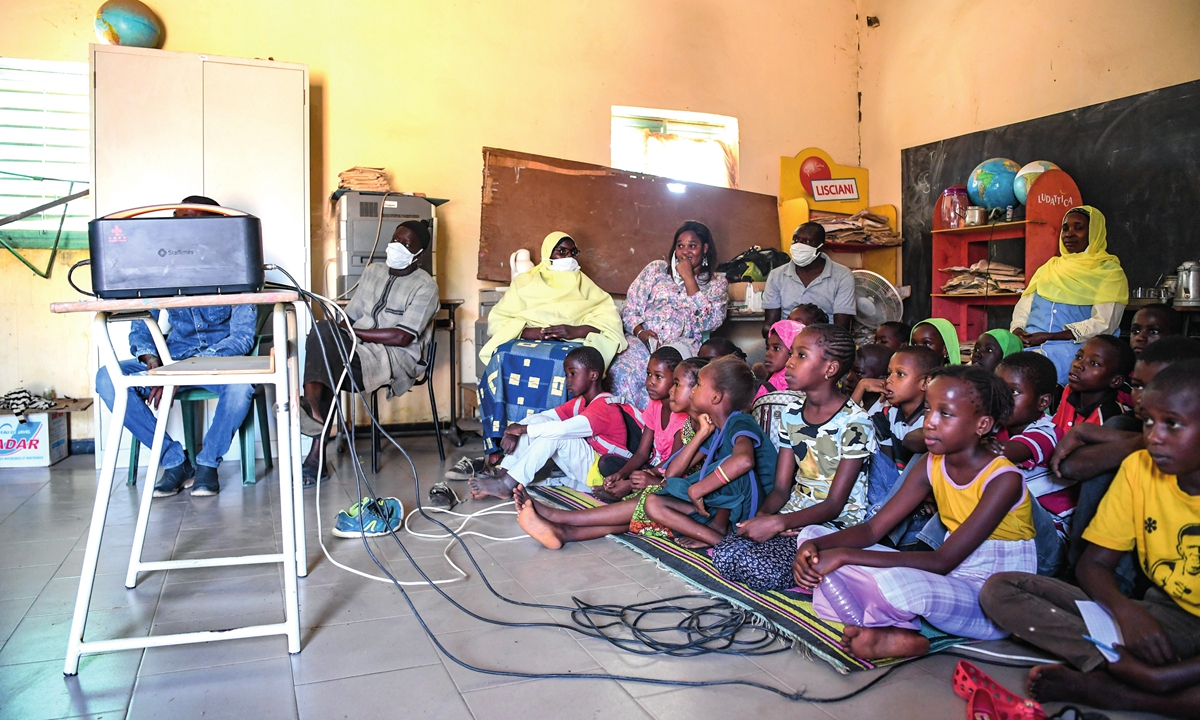 Children watch cartoon through a projector at a village in Dakar, Senegal on November 22, 2021. The China-aided "Wan Cun Tong" project aims to connect 10,000 villages with digital satellite signal in more than 30 African countries. Photo: Xinhua

The project has brought many conveniences and changes to peoples' lifestyles, particularly among the youth, said StarTimes. In a public primary school in rural Kenya, students began enjoying modern digital learning since the project installed a solar projection system there, the company illustrated."The project is a beneficial, win-win cooperation between China and African countries," Liu Haifang, director of the Center for African Studies at Peking University, told the Global Times. It offers people in Africa a portal through which to learn not only about the world as a whole, but also more about their good partner and friend, China, she said.Now "looking east" and "learning from China" have become a trend in African countries, Zhang Weiwei, director of the China Institute of Fudan University in Shanghai, said in his speech in October.

"With the promotion of the Belt and Road Initiative, and the rapid development of China-Africa trade, the experience of China's successful rise will attract and inspire a great many people in Africa," Zhang said.